THE OCEANSIDE SEVENTH-DAY ADVENTIST CHURCH
God said, “I have given you every plant with seeds on the face of the earth and every tree that has fruit with seeds.  This will be your food.”   - Genesis 1:29

Be joyful and eat for an abundant life!!
​

Butternut squash is a winter squash that grows on a vine.  It has a sweet nutty taste similar to that of a pumpkin.  The skin is tan-yellow with an orange fleshy pulp with a compartment of seeds in the bottom.  When ripe, it turns increasingly deep orange and becomes sweeter and richer.  It is technically a fruit but is used as a vegetable that can be roasted, toasted, pureed for soup,s or mashed and used in casseroles, breads, and muffins.  It is a good source of fiber, vitamin C, manganese, magnesium and potassium.  It is an excellent source of vitamin A and vitamin E.
​
One of the most common ways to prepare butternut squash is roasting.  The squash is cut in half lengthwise, lightly brushed with cooking oil or put in a thin layer of water and placed cut side down on a baking sheet.  It is then baked for 45 minutes or until soft.  Once roasted, it can be eaten in a variety of ways.  The squash is prepared by removing the skin, stalk, and seeds, which are not usually eaten or cooked.  The seeds are edible, either raw or roasted.  The skin is also edible and softens when roasted. 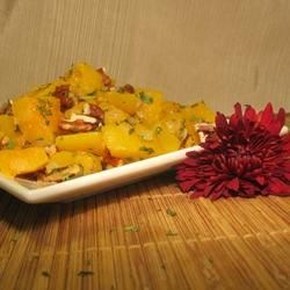 Butternut Squash with Onions and Pecans  (adapted from allrecipes.com)

Option 2:  In a large saucepan, heat the oil, add the onion, celery and carrot and saute for 3 minutes, or until onion is translucent.  Add the garlic and ginger and saute for 1 minute longer, stirring constantly.  Add the pears to the pan with the squash, potato, and stock and bring to a boil.  Reduce heat and simmer and cook for 30 minutes or until the squash is tender.  Add lemon juice.  Transfer soup to blender and puree until smooth.
​
Serves: 6   Calories: 228 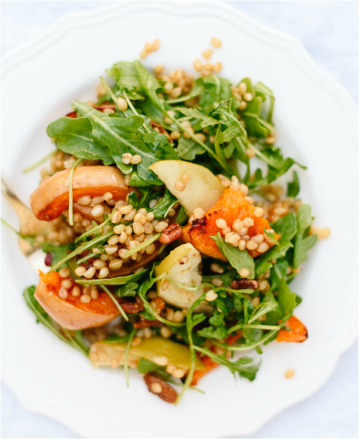 Hearty Roasted Butternut Squash & Apple Salad  (from cookieandkate.com)
Ingredients:
Salad:Cinnamon-maple pecans:​
Ginger Dressing:
Directions:
1.  To prepare the wheat berries:  Rinse them then place them in a medium pot with 3 ½ cups water.  Bring to boil over high heat, cover and reduce heat and simmer for 1 hour, or until the wheat berries are pleasantly tender but still have some chew to them.  Drain off excess water, return the wheat berries to the pot and stir in ¼ tsp salt.  Set aside to cool.
2.  To roast apples:  Preheat oven to 425 degree F.  Line one small and one large baking sheet with parchment paper.  On the small sheet, arrange the apple wedges in a single layer.  Bake the apple slices on the middle rack for 10 minute, until they are starting to collapse on themselves but before they have burst open.  Let the apple slices cool on the pan before removing.
3.  Meanwhile, to prepare the squash:  Slice off the top and bottom ends of the squash, then slice it in half vertically.  Use a spoon to scoop out the seeds and discard them.  Slice the squash into ½”wide half-moon shapes.  Transfer the squash to the large baking sheet and drizzle with 1 Tbsp olive oil.  Toss until the squash i lightly coated in oil and sprinkle with salt.  Arrange the squash in a single layer and roast for 30 minutes, tossing halfway, until the squash is tender and caramelized on the edges.  Set aside to cool.
4.  To prepare the pecans:  In a medium skillet over medium heat, toast the pecans until they are fragrant, stirring frequently, about 4 minutes.  Add the maple syrup and a generous pinch of cinnamon and salt and cook, while stirring constantly, until the syrup has condensed and mostly evaporated, about 2 more minutes.  Transfer to a plate to cool.
5.  To prepare the dressing:  In a small bowl, combine the olive oil, lemon juice, ginger, maple syrup, mustard and salt.  Whisk until thoroughly blended and season to taste with freshly ground black pepper.
6.  To assemble the salad:  In a large serving bowl, add the arugula, cooled wheat berries and apple slices.  Before you add the butternut, you might want to slice the larger half moons in half, so they are more bite sized.  Add the butternut, dried cranberries, and pecans, then drizzle with dressing.  You might not need all of it.  Toss to lightly coat.  Serve immediately. 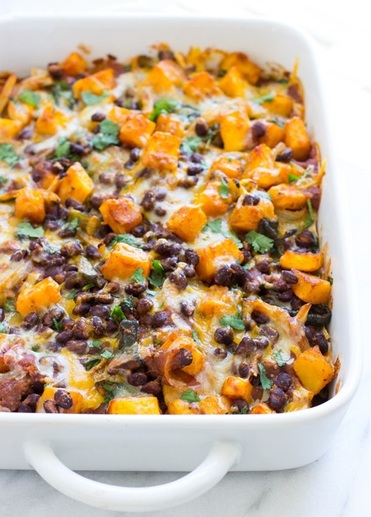 Butternut Squash Enchilada Casserole    (from Makingthymeforhealth.com)
Ingredients:
Directions:
Preheat the oven to 400 degrees F then place the diced butternut squash, onion, garlic, jalapeno and poblano pepper in a 9 X 13” baking dish and toss with oil.  Sprinkle with cumin, salt & pepper (to taste) then mix until evenly distributed.  Roast vegetables in the oven for about 40-45 minutes, until the squash is tender.  Remove from the oven then lower temperature to 350 degrees F.

Transfer the roasted vegetables to a large bowl along with 1 cup salsa, drained and rinsed black beans and chopped cilantro.  Using the same baking dish that you roasted the veggies in, prepare the casserole by spreading a thin layer of the salsa along the bottom, then cover with a layer of tortillas.  Top the tortillas with ⅓ of the roasted vegetable mixture then ½ cup cheese.

Layer tortillas on top of the vegetables followed by the baby spinach leaves.  Top with a thin layer of the salsa and another ⅓ of the roasted vegetables then ½ cup shredded cheese

Lastly, add the last of the tortillas, a think layer of salsa and the last ⅓ of the vegetables on top.  Sprinkle with remaining cheese and bake in the oven for 20 minutes, until light golden brown on top.  Allow to cool for at least 5-10 minutes then cut into squares and serve.  Garnish with avocado, cilantro or plain Greek yogurt.
Serves: 6 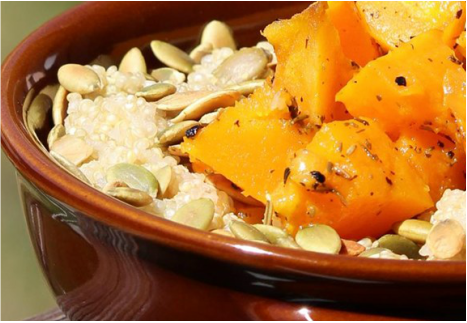